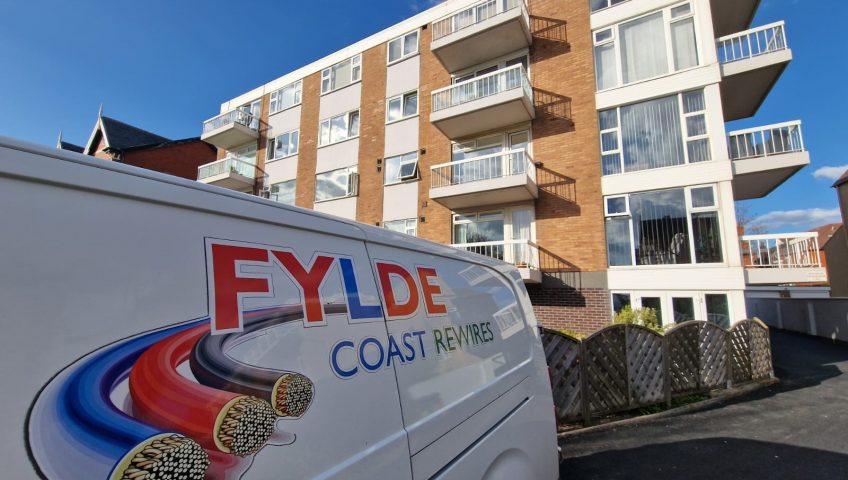 CAN YOU REWIRE AN APRTMENT WITH SOLID CONCRETE FLOORS AND CEILINGS?

Last week Fylde Coast rewire’s had been contracted to carry out an apartment electrical rewire over in Lytham St Annes. As far as electrical rewires are concerned, this was a tricky project.

FCR Originally carried out an EICR (Electrical Installation Condition Report) when the owner had first bought this property. On completion of the EICR, it was noted that there was no earthing on the sockets, this was mainly due to the circuits being wired in Pyro. Pyro was in it’s day a great cable, it is durable, fireproof and hard waring, sadly, just like ourselves this does not last. With the amount of remedial works required to bring the installation up to a safe and current standard, it was more cost effective to rewire the property.

The biggest obstacle to rewiring this property was the solid concrete floors and ceilings the only option was to chase around the top of each room, the wiring regulations B.S.7671 state that the top 150mm of each room is a designated cable zone, this allows you to run your cables around the top of the rooms whilst keeping within the wiring regulations. The wiring regulations also state that a cable zone can run from floor to ceiling within a corner of a room, again keeping to the 150mm wide chase. So, this is how we installed the cables, there was a lot of chasing and dust, dust was kept to a minimum by only chasing one room at a time and tidying and vacuuming the rooms on completion.